Geothermal Heat Pumps: The Next Generation

The most efficient way to heat and cool a building just got more efficient.

Scott Lankhorst, President of Synergy Systems, a GHP installer in Kingston, NY, called the jump in efficiency “pretty amazing… 30 EER has been the max for quite a while now.”  Lankhorst says that Climatemaster hopes to have the Trilogy 40 in full production by the end of the year.

According to Barry Golsen, President and COO of LSB, the Trilogy 40 will also have improved heating performance, with a Coefficient of Performance (COP, the industry measure of heating efficiency) of 5 at ground loop conditions.  This is also a significant increase, with the best GHPs in the Energy Star list having COPs of 4.1.

In addition, they’ve added new functionality, called “Q-Mode.”  Q-Mode is the result of a collaboration between Climatemaster and Oak Ridge National Laboratory.  It allows the GHP to produce hot water even when it is not being used for space heating or cooling.  According to Chris Williams, technology evangelist at Heatspring, a provider of renewable energy and energy efficiency training and certification, producing hot water year round required additional equipment (and cost) with traditional heat pumps.

Yet Climatemaster is not moving into 40 EER territory unchallenged.  On GHP manufacturer Waterfurnace Renewable Energy’s (TSX:WFI, OTC:WFIFF) first quarter conference call, an analyst asked CEO Tom Huntington if Waterfurnace had an answer to efficiency breakthroughs at “a competitor.”  It does.  Huntington believes Waterfurnace’s new 7-Series GHP’s will be even more efficient than Climatemaster’s Trilogy.  Variable speed compressors (see below) are available from a number of vendors, and Huntington believes that the compressor used in the Trilogy is less efficient than the on Waterfurnace has selected for the 7-Series.

How did they achieve these efficiency breakthroughs?  Both companies speak of “variable speed technology.”  According to Lankhorst, what they mean is variable speed compressors.  Current GHP models use two stage scroll compressors.   Variable speed blower motors and pump fields have been available for some time, although they often require the special controllers.

Variable speed compressors are new.  According to Williams, “there has been a huge amount of innovation in air source heat pumps,” and the innovations are now being applied to ground source technology.

Climatemaster’s Q-Mode a control system that integrates the GHP and components with the hot water tank, enabling the heat pump to deliver hot water year round.  Previously, year round hot water required additional components, or a back up heating source.  Q-Mode is patent pending, so it may be that it will give Climatemaster a competitive advantage if competitors like Waterfurnace are unable to duplicate the functionality without infringing patents.

The integration of components and jump in efficiency should make these new systems attractive to installers in the field.  According to Lankhorst, the Trilogy may be especially cost effective in high-end residential applications, where the integrated system will eliminate several separate components.  Year round hot water is less of an advantage in commercial applications, since commercial installations operate nearly all the time in cooling mode, when free hot water is produced as a byproduct of cooling the building.

On the other hand, the spot efficiency ratings of a GHP are far from the only factor in determining the effectiveness of a GHP system.  According to Williams, proper ground loop, distribution, and system design can potentially have a greater impact on system efficiency. 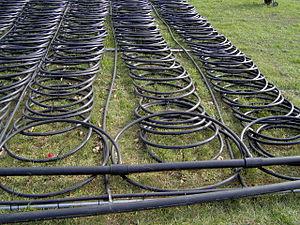 When contractors select a GHP, technology tends to be more important in commercial operations than in residential ones.  The cost of the heat pump is a small fraction of the cost of drilling the loop field, so residential installers are more interested in the level of technical support offered by the distributor, so these competitive advantages will vary from region to region.

On the other hand, if Q-Mode makes for much simpler installations, Climatemaster stands to gain residential market share unless its competitors can offer similar integration without infringing its intellectual property.

The next generation of efficient ground source heat pumps are a significant step forward in energy efficient climate control.  Nevertheless, for the next few years, I’d expect that these variable speed compressor pumps will only be used in a small fractions of installation.  Geothermal heat pumps are already so efficient that the additional savings may not be enough to justify the higher up-front cost.  Additionally, Waterfurnace introduced their new 5-Series line of GHPs with two stage compression in March, at a slightly lower price point than the Envision product it replaces.

Either way, the cost of saving energy continues to fall, and the potential customer base for geothermal heat pumps will grow as higher efficiency and lower prices make them an even more economical approach to climate control.

View all posts by: IslandPumpTank